Spring rolls and all that

by CCME Content Team
Share on FacebookShare on Twitter
A head of a Dubai-based company talks of refrigeration challenges he encountered at his facility and their impact on business. 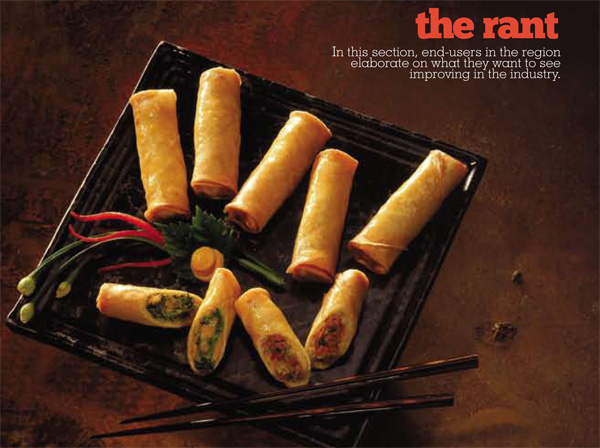 A head of a Dubai-based company talks of refrigeration challenges he encountered at his facility and their impact on business.

At the time of my joining the company, two years ago, we were producing frozen snacks. The personnel involved were not aware you had to blast-freeze the snacks and were using a normal freezer to do the job. This was, of course, counterproductive. Let’s say, you have to produce 500 spring rolls. To freeze it to -18C, it will take 48 hours if you were to use a normal freezer.

So in effect, it took two days from the time the customer placed the order, to deliver the snacks. The turnaround was very slow and, needless to say, was unacceptable. We lost business, because customers were not willing to wait that long.

In the case of the 500 spring rolls, a blast freezer would have helped accomplish the job in two to three hours. Also, it would have helped retain the texture and taste of the snacks and the nutrients in them.

We eventually did buy a blast freezer – that was about a year ago – and installed it. Today, I am happy to say, we have a quick turnaround and are able to stock up larger quantities and sell more. And the quality of the products has improved.

Another issue I confronted after joining the company was a heat build-up in the space between the ceiling and the roof, especially during the hot summer months. The people who had designed the facility had somehow contrived to install the condensing units of all the walk-in freezers and walk-in chillers in the space above the ceiling and below the roof. This type of arrangement allowed for no air venting, which caused all the freezers and chillers to heat up and break down, especially during the hot summer months. Naturally, this in turn, caused us to lose business, because we were not able to deliver the products on time. We eventually resolved the problem by relocating the condensing units to outside the facility. This had an immediate effect on the freezers and the chillers in the sense that the temperatures started to improve.

At the time of my joining, I was confronted with yet another legacy issue – in the form of four freezer vehicles. They were of inferior make, and the company had bought them new at a price of Dh 55,000 each. The engine capacity of the vehicles was so small you couldn’t keep them running for long. Also, they couldn’t travel at a satisfactory speed, and they broke down almost once every month.

I guess it will suffice to say that we suffered owing to high temperatures, because the vehicles, with their small engine capacity, could be only good as chillers and not as freezers. I say this, because to be a freezer, you need a high-capacity engine. Our temperatures were so bad customers had to return the products we delivered.

We eventually sold the four vehicles off and bought two new 2.7-litre pickups, and the freezer units were retrofitted by a leading refrigeration company. Today, I am a happy man. The vehicles are powerful and, to date, have not been the cause for a single complaint. And I am able to deliver my products to the satisfaction of my customers.

I learnt many facts from the three episodes. You would if you lost Dh 200,000 in business, as we did. Firstly, the region could do with better expertise. Of course, there are good consultants in the region, but, keeping in mind that you always get what you pay for, you have to be careful in identifying the good from the bad, which are the type that are intent on only making money and walking away. Secondly, it is important for food companies to increase their knowledge base on refrigeration – that way, they will be able to demand better service from consultants, equipment suppliers, contractors and maintenance companies. We lost business, because we were victims of poor installation and maintenance services. From a food-safety point of view, we were delivering products at higher temperatures, which were being rejected by clients. So the moral of the story is buy high-quality products and go through proper refrigeration experts to accomplish your goals.

(As told to B Surendar)

The writer has been associated with the food industry in the Middle East for 20 years.