by CCME Content Team
Share on FacebookShare on Twitter
Case study to find out the efficiency and effectiveness of Airfree’s patented Thermodynamic Sterilising System (TSS) on fruit, vegetables and perishables.

A study was conducted to find out the efficiency and effectiveness of Airfree’s patented Thermodynamic Sterilising System (TSS) on fruit, vegetables and perishables. The result showed that the system had a proven advantage over ordinary cooling units. 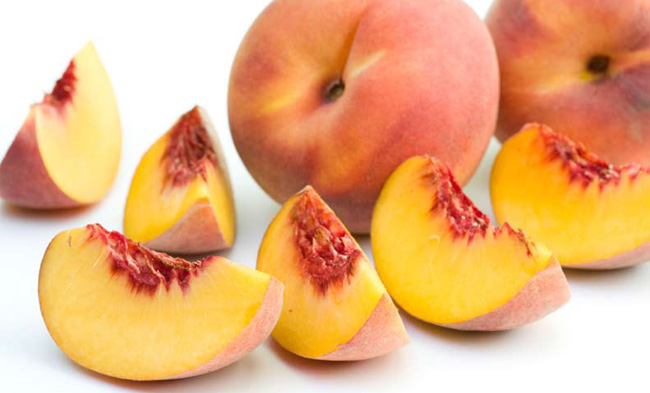 The Thermodynamic Sterilising System patented by Airfree works on basic principles of physics. Hot air rises through the sterilising system. This creates a convection pull to bring new air into the system. This process is assisted further by airflow in commercial chiller units. Once inside, the TSS technology incinerates 100% of micro-organisms at an internal temperature of 200° Centigrade. The sterilised air is then cooled and returned to the room, without increasing the overall ambient temperature.

Although the internal temperature is 200°C, thanks to cooling and the small scale on which the system operates, two units emit the equivalent kilojoules of heat as one person breathing, and the system does not increase the temperature in controlled facilities.

The study was conducted at Shokri Hassan Trading Company (SHTC), Dubai, from October 4 to 28, 2010.

Aim: The aim of the test was two-fold:

A) To formally assess the viability of installing the Thermodynamic Sterilising System throughout all SHTC chilled storage areas by measuring increase in shelf-life of Airfree in a fully functional commercial chiller.

B) Investigating the system’s potential to allow for an increase in chiller temperature settings and, thus, reducing cooling and utility bills.

Trays of peaches from SHTC’s regular stocks were used, selected from the same batch at random and placed in four test chillers on October 4, 2010. The Berry Room was Airfree-installed and Chillers 1, 2 and 3 were not installed with Airfree. Photographs and the aforementioned variables were taken initially every second day and, then, daily up until October 28, 2010. 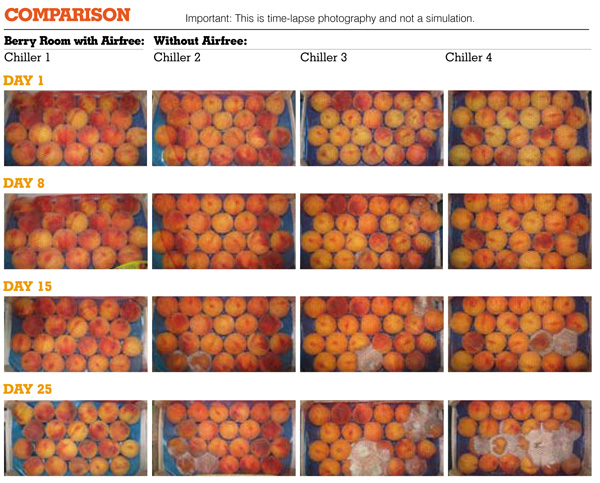 SHTC had its Berry Room installed with 3 x Airfree WM50+ units in stainless steel (wall-mounted) in April 2010, and three chillers were without Airfree. A significant difference in terms of reduced spoilage was noted by the management, following the purchase and installation of Airfree units in an area where the most perishable and expensive produce is stored, namely, the Berry Room. A further study was requested to assess the viability of further investment and extended installation of the system.

Shelf life: The peaches in the Berry Room, the chiller with Airfree installed, remained in a saleable condition for the entire 25-day period, with no signs of mould or decomposition. Peaches in all three control chillers were affected by mould and were decomposed.

In Chiller 2, mould was visible by Day 6.

In Chiller 3, mould was visible by Day 8

In Chiller 1, mould was visible by Day 9.

It can, therefore, be concluded that using the Thermodynamic Sterilising System, a company storing fruit and vegetables can increase temperature settings in their chillers by at least 2.5°Centigrade and, still, achieve shelf-life extension of at least 2.5 times. 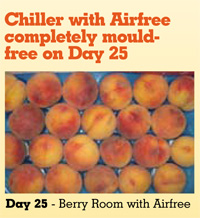 Peaches from Chillers 1, 2 and 3 were discarded on Day 25 at the end of the study. Peaches from the Berry Room were retained for the purposes of further research into the full shelf- life extension possible, using the system. These peaches were inadvertently discarded on Day 32. But it was noted that they were still mould-free when pictures were taken earlier that day. Therefore, it can be concluded further that the Thermodynamic Sterilising System extended the shelf-life produce by between 23 and 26 days, indicating more than 3.5 to five times of extended shelf-life over produce stored without the system.