Harnessing the sun to cool the Earth

by CCME Content Team
Share on FacebookShare on Twitter
With the increasing cost of electricity, solar cooling systems could be a more viable option, despite initial challenges, argues Muhammad Ali.

With the increasing cost of electricity, solar cooling systems could be a more viable option, despite initial challenges, argues Muhammad Ali.

QUALITY AND QUANTITY OF SOLAR ENERGY

The sun is a continuous fusion reactor in which hydrogen is turned into helium. The total energy output from the sun is 3.8 x 1020 MW, which is equal to 63 MW/m2 of the sun’s surface. 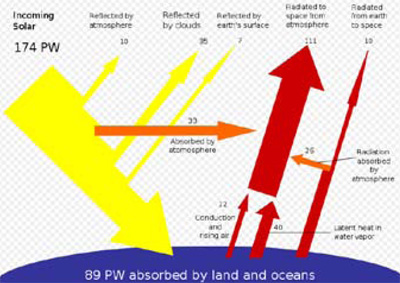 The Earth receives only a tiny fraction of this emitted energy, which is equal to 1.74 x 1011 MW (or 341 W/ m2 average). However, it is estimated that 84 minutes of solar radiation reaching the Earth can satisfy the world energy demand for one year (about 900 EJoules).

The amount of solar energy available at any specified place depends upon three factors:

Solar energy can be converted into chemical, electrical, and thermal processes. Solar energy is converted into electricity through photovoltaic conversion (sun to electricity). Solar thermal conversion in the form of hot water, steam or other heat transfer fluids can be used for space heating and cooling, domestic water heating, power generation, distillation and processes heating.

The major components of a solar thermal air conditioning system are the solar collectors. They are heat exchangers that absorb solar radiation energy, convert it into heat and transfer the heat to heat transfer fluids (air, water or oil).

The thermal energy, thus collected, can either be used directly for air conditioning or can be stored in thermal energy storage tanks for later use – at night when sunlight is not available.

A non-concentrating collector has the same intercepting and absorbing area, while the concentrating collector is typically a sun-tracker that uses concave reflecting surfaces to concentrate solar beams on to a small receiving area and increase the radiation flux to many times. This produces heat transfer fluids of high temperatures. (See table 2 at end of this story) 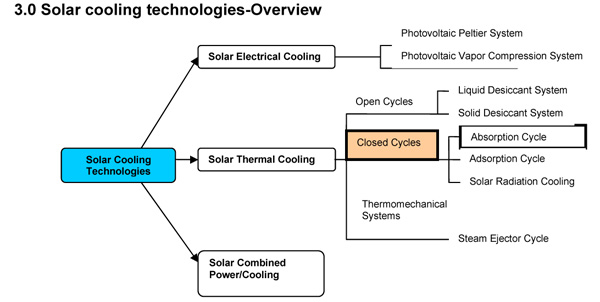 Due to the intermittent nature of solar energy, it is a better option to use a thermal storage tank to store the heat for later use. This serves two purposes: first, the problem faced by the intermittent nature of solar energy can be overcome and second, the stored heat can be utilised at night when sunlight is not available or during peak load time for load shifting.

Solar absorption air conditioning systems can be configured in many different ways. The situation becomes more interesting when multiple heat source streams are used in conjunction with solar heat. But the alternatives must be evaluated very carefully so that they meet the specific needs and requirements of a project.

We can categorise solar absorption air conditioning systems broadly into the following options:

Option 3: Utilising two different absorption machines – one working with the solar hot water and the other, directly fossil-fired during the sun depleting hours. (hot water + direct-fired)

What the options entail:

The diagram, on the opposite page, represents a schematic depiction for a single-stage hot water-operated chiller. The hot water obtained from the solar collectors is stored first in the hot water thermal storage tank. This can help overcome the problem of the intermittent nature of the sun. Moreover, the hot water can be used when the sun is not available – cloudy days or at night.

However, this system is not flexible enough to suit the operation when sunlight is not available. This shortcoming can be overcome by adding a chilled water thermal energy storage tank. In this way, the chilled water can be provided during evenings and cloudy days. But, again, the volume of chilled water storage for the same amount of stored energy is higher than hot water storage. Hot water storage, therefore, is a preferred arrangement.

The triple-effect absorption chillers require 250°C steam at 40 bars and assure a COP of 1.8. The CSP collectors can be used to produce this quality of steam.

The heat from the solar collectors can be stored in molten salt storage tanks that can be used during the non-sun hours. The concept is more suitable for power production, as it requires a large setup and big investments.

The multi-energy type unit utilises standard proportions for fuel, like:

However, the fuel proportions can be altered with custom-made units, meeting project requirements.

Utilising two different absorption machines – one working with the solar hot water and the other, direct fossil fuel-fired for the sun-depleting hours. (hot water + direct fired)

The hot water-operated chiller can be a single-stage one, which can be provided with hot water from low-cost evacuated tube collectors.

An economical solution would be to use the single-stage hot water chiller with the double-effect direct-fired chiller. This assures good overall COP.

The condenser water of the steam turbine can be used to run an absorption chiller, and thus be assured of a cogeneration- chilled water system. (See “diagram 4” at the end of this story)

The auxiliary components and subsystems for solar-powered absorption air conditioning systems are:

Intermittent supply of solar energy is the main challenge posed by solar cooling systems. But this can be overcome by energy-storage devices and financial incentives, respectively. Well-designed chilled water systems have the potential to save primary energy (40-60%). But higher first cost, that is, 2 to 2.5 times more than conventional electric chillers is another challenge. This can be obviated by:

In general, small capacity systems are required to penetrate the technology at all levels. Also, there is a need for an advanced operation and control system.

There are other barriers that might hinder the growth of the solar cooling system market. They are:

The following challenges need to be addressed when working out the cost-effectiveness of the system:

Now, that the other aspects of the concept of solar cooling systems have been analysed, it is time to look at the financial fine print.

Privately owned buildings require a payback period of two to three years. Five to seven years is sometimes acceptable, but if it is over 10 years, it is economically not attractive.

The case is different for publicly owned buildings such as schools and government offices, where an extended payback period might be justified.

In conclusion, one can say that with electricity and natural gas becoming increasingly more expensive, the concept of solar cooling will become a more economically attractive option, as it can result in less peak load on grids. But the fact remains that it requires financial support schemes at the national level in order to overcome the initial cost barrier, improving market penetration and exploiting the economies of scale.

Financing can come from multiple sources, including upfront equity, debt financing, incentive schemes, including subsidies, low-interest rate loans, grants and tax incentives. It is interesting to note that despite it being economically not a very attractive option, we have seen 100 new solar cooling projects in 2009. This is, indeed, an encouraging figure. 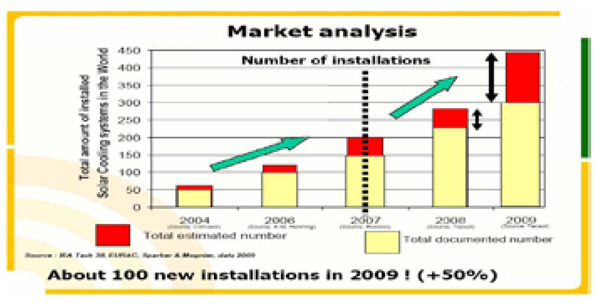 The writer is Senior Mechanical Engineer, ADC Energy Systems, Dubai, UAE. He can be contacted at: mali@ADCEnergySystems.com 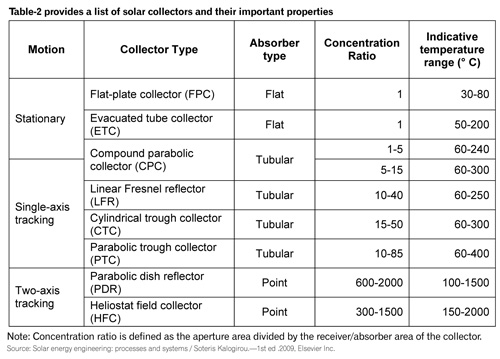