by CCME Content Team
Share on FacebookShare on Twitter
The owner of Al Ghurair City, in 2009, decided that the nearly 30-year-old facility needed a make-over, including a replacement of the air conditioning system. Trane got the call.

The owner of Al Ghurair City, in 2009, decided that the nearly 30-year-old facility needed a make-over, including a replacement of the air conditioning system. Trane got the call. 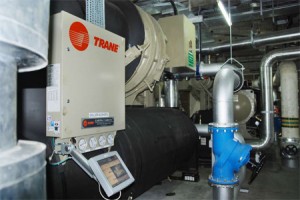 Launched in 1981, Al Ghurair City was built by the Al Ghurair family on an empty plot of land. It was the first modern shopping mall project of its kind in the Middle East.

In addition to the mall, Al Ghurair City includes office space and two-, three- and five-bedroom, fully serviced apartments. It is located in Rigga Road in the heart of Deira and is just a short taxi ride from historical attractions, such as the Dubai Museum and the famous Gold Souk.

With 189 retail shops, 19,085m2 of office space and 343 apartments, it has a significant presence in the area. The facilities are well provisioned with an in-house leisure and recreation club that includes tennis and squash courts, ‘weather-controlled’ swimming pools, basketball and soccer courts and a stateof- the-art gymnasium.

Impressive though this is, how does an owner-operator maintain standards of service and comfort in what is, after all, nearly a 30-year facility? And what of the changing needs of present-day customers and clients, considering the current competitive nature of the retail and commercial market in Dubai, which brings raised expectations of customers and clients?

Considering the two, Al Ghurair City, in mid-2009, decided to add a major new extension, which in the words of the owner, would be modern in every respect. At the same time, giving due consideration to the age of the building, it decided to pay equal attention and care to the established part of the facility. One important aspect was the air conditioning system, which after almost 30 years of excellent service, was clearly in need of replacement. And for this, Al Ghurair City zeroed-in on Trane.

It was decided that the final scope of works would include the re-engineering of the chilled water system, replacement of the watercooled chillers and the installation of an appropriate chilled water control system. Carrying out all these activities, the management concluded, would deliver significant energy savings, resolve issues of an ageing plant and greatly improve operational management of the system.

The original and stilloperational chiller plant comprised four Trane watercooled centrifugal chillers, with a total capacity of 3,000 TR. In addition to the chiller plant, it was clear that ancillary equipment, such as pumps, starters, pipe work, electrics and controls would need to be carefully assessed and, depending on their impact on the system, either upgraded or replaced.

Of utmost importance to the owner was that any work should not interrupt the business or inconvenience the many clients in the building. 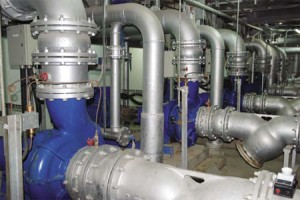 The obvious step to mitigate this very real risk was to undertake the majority of work in the winter, but as the load during the cooler months was difficult to predict, no one could say with any degree of certainty what cooling needed to be provided during the change-out. To manage this to the satisfaction of all parties, Trane proposed to first service the existing chillers and have a 1,200 TR temporary cooling system on standby, in the event of a complete shut-down or unexpected circumstances.

Another important aspect was the original R11 lowpressure refrigerant, now a controlled chemical. For many years, this was the preferred refrigerant for lowpressure centrifugals, as its thermodynamic qualities are outstanding. However, with the advent of the Montreal Protocol, which was developed to reverse the damage that was being inflicted on the ozone layer, it is now a substance that cannot simply be disposed of without due care and attention. Trane secured the full support of the Al Ghurair team when it proposed that the replacement project must include the safe removal and disposal of the refrigerant.

Over 30 years, a lot can happen in and around a plant room, and the facility at Al Ghurair City was no exception. Many modifications had been made to the original design and, of course, many other systems had been added in and around the existing installation, making understanding of and, indeed, access to the system a challenging undertaking. This meant that whilst drawings were available, they could not be relied upon to plan the carefully phased nature of isolation, shutdowns and change-outs.

The first major shutdown was undertaken on December 10, 2009, a date that Ra’id Al Jabi, Service Manager for Trane remembers well, as it was the moment when months of planning and preparation were put to the test. However, once the main isolating valves were installed in the evaporator and condenser lines (and observed to hold the enormous pressures in the system) the real work could begin.

To give some idea of just how complex the system had become, Trane’s project team, led by Mark Jolly, along with the very capable Al Ghurair City technical staff, had to locate and isolate around 300 valves before any modifications or replacement could be undertaken. This was an enormous task and required an intensive coordinated effort.

In fact, one of the deciding factors in selecting Trane for the job was that the company demonstrated a clear understanding of the magnitude and complexity of this particular aspect. Had the team got this wrong, the whole project would have been jeopardised.

Other key preparation work included the isolation, removal and replacement of the main headers and the demolition of a 4x7m wall to provide the required access for any future work. On completion, a new wall was built – though this time with a suitable access door to facilitate future service and maintenance work – and rendered to match the surrounding finishes. 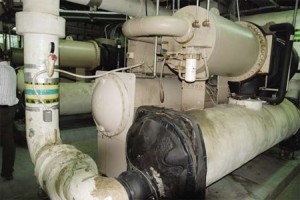 Elsewhere, in the crowded two-floor plant room, which was buried in the heart of the building, the pumps were thoroughly inspected and deemed suitable to handle the installed capacity of the proposed new chiller configuration.

To ensure that the electrical side of the equation was brought up to date, all old panels and starters were removed and replaced with Ben Shaw starters and nine TAMCO, 3.3 kV, 400amp vacuum circuit-breakers.

To get the old chillers out and the new centrifugals into the congested plant room forced the team to devise a plan of Rubik’s Cube complexity and precision; after all, the chiller change-out had to be undertaken without taking the cooling plant off-line. To further complicate matters, the main plant room was located not just deep within the building, but up on the third floor. Trane engaged the services of Transport Technics and Services (TTS) International who specialise in the handling, transportation and installation of heavy and oversized cargo by land and sea. Trane had previously worked with TTS on the equally challenging chiller installation of the Burj Khalifa, a few years earlier.

But of course, before the chillers could be dismantled and removed, the refrigerant had to be captured and disposed of, in accordance with recognised industry standards. To assist with this important aspect of the job, Trane partnered with EnviroServe, who are a registered company, established under a Professional License for Pollution and Environment Protection Services.

The Trane services team worked closely with EnviroServe to recover over 1,800 kilogrammes of CFC-11; equivalent to about seven drums.

Stuart Fleming, Managing Director of EnviroServe, said: “All procedures were followed to complete the safe disposal of the old refrigerant. There was no release of the potentially harmful chlorofluorocarbon to the atmosphere nor did any venting occur while undertaking the assignment. The CFC-11 will eventually be transported to Linde AG, Industrial Gas Division in Germany, for destruction, once the license and authorisation are obtained and sufficient volume is achieved for shipment. The refrigerant will be transported under the Basel Convention as ‘hazardous products’.”

Nigel Hawley, Territory Leader, Trane (Middle East, India & Africa), added: “Our commitment to safe environmental practice remains, regardless of our contractual scope and obligations. We are dedicated to safe and ethical business practices for a better and greener tomorrow. EnviroServe is the only dedicated refrigerant reclamation company in the Middle East, and we were happy to partner with them to reclaim, recover and dispose of potentially harmful refrigerants in a safe and environmentally responsible manner.”

The remains of the old chillers and associated scrap were also safely disposed of using another qualified vendor. Though Trane’s scope of work was limited to loading the old chillers onto trailers, they ensured that the nominated sub-contractor took due care to dispose of the material in an environmentally responsible manner.

In addition to the electromechanical work, Trane installed its Refrigerant Recovery system and storage tank in the plant room to avoid potential venting issues, even though the newly installed chillers used the environmentally recognised R123 low pressure refrigerant. A LoVac recovery pump is also on standby. This recovery system is very popular due to its fast recovery rate, its light weight and ease of operation. In addition, a refrigerant monitor was also installed, in accordance with ASHRAE 15 guidelines.

To ensure that all components worked as an optimised system, Trane upgraded the existing Tracer Summit chiller plant manager with custom graphics. This now allows users easy access to various parameters of the equipment, such as chilled water and condenser water pumps.

In the discussions leading up to the award of the project, the Al Ghurair team had expressed a strong interest in ensuring that they would get a chiller plant that would be reliable, durable and efficient. The new chiller configuration comprised two CVHG-670 and two CVHG-1100 EarthWise simplex water-cooled centrifugal chillers. Net cooling capacities are 515 TR and 950 TR respectively at 7.2/12.8ºC chilled water temperature range and 35.0/41.0ºC condenser water temperature range. 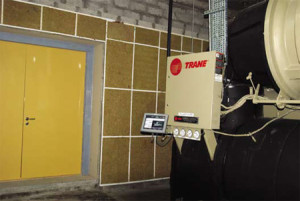 Replacing a whole chiller plant is a major investment, and the client was obviously very interested to have an idea on how quickly his investment might pay back. Using Trane’s Trace 700 energy-modelling software, which took into account many parameters, including the efficiency of Trane’s new EarthWise centrifugal chillers and the current rate for electricity, it is estimated that, over their 30-year life, the chillers will result in a saving of around Dh10 million, which comfortably exceeds the cost of the entire replacement project. In addition, the owner may look forward to an increase in capacity and significantly reduced service and maintenance charges, not to mention improved reliability.

As mentioned earlier, Trane did put in place a temporary cooling plant for any unexpected eventualities? However, the old chillers, which were serviced just prior to the job, produced the required capacity during the change-out, and the isolation valves held as planned. As a result, there were no ‘unexpected eventualities’. So, thanks to proper planning and execution, the temporary cooling plant was dismantled and shipped back to the yard without seeing a minute of operation.

Ramzi Jaber, Trane’s project engineer, confirmed that the commissioning of the system was completed on April 1, 2010, which was slightly ahead of schedule, on budget and with no interruption to the client’s operations.