Undetectable to the eye and by conventional leak detection methods, leaks of up to 300 microns bleed money through energy wastage, as compressors work harder to maintain temperatures with decreased refrigerant charges. Companies are wasting increasing amounts of money on energy costs, even as global warming puts heavier loads on cooling systems. In the light of this, dubbing it an alternative to continuous servicing and searching for leaks – or the even more expensive total replacement of refrigeration/ air conditioning systems – Cliplight Manufacturing offers its latest product, Super Seal Total. 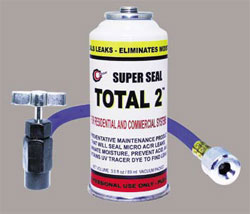 The original Super Seal sealant formulation can be used in applications ranging from factories to food processing plants and from shops to offices. Refrigerant containing Super Seal reacts with moisture in the atmosphere, as it escapes through leaks, forming a permanent lowtensile crystalline structure, which seals the hole from the inside out.

Cliplight’s new DRY R formulation is developed to address the issue of moisture/ acid and the formation of sludge. It chemically removes water from the system and improves drier efficiency.

An ultra-violet tracer dye marks any leaks that are too large for Super Seal to seal, making them simple to detect with standard UV fluorescing lights.

“Increasingly Super Seal Total is being used, not only as a cure, but also as a three-in-one preventative incorporated into maintenance programmes to safeguard against energy cost and pollution penalties, and also, ultimately, against the cost of replacing entire systems,” says International Sales Manager and HVAC/R specialist, Gary Oborne of Cliplight Manufacturing.

He elaborates: “Downtime involved in this process can be crippling to the owner’s business, particularly in the hospitality, product processing and retail areas. Equipment owners are faced with not only the loss of trade, but also potentially massive costs associated with the temporary ‘housing’ of their products.”

Oborne cites the cases of foodstuffs, pharmaceuticals and perishable goods as examples.