‘Let’s get it done outside’

by CCME Content Team
Share on FacebookShare on Twitter
The market for outsourced facilities management is growing at a fast pace in the region, thanks to the advantage it offers, in the form of reduced overhead costs. Frost & Sullivan’s Ramesh Kumar has the report.

The market for outsourced facilities management is growing at a fast pace in the region, thanks to the advantage it offers, in the form of reduced overhead costs. Frost & Sullivan ’s Ramesh Kumar has the report .

With the arrival of multinational corporations, the demand to adopt and retain international standards is evident in all areas of society. This has induced a need to maintain facilities and increase the lifecycle of the building. Though the actual advantages of hiring a professional facility management company to maintain buildings and assets is still not acknowledged, the market for it is growing at a phenomenal pace.

The market for outsourced facilities management has been growing at an exponential pace since the year 2000, mainly fuelled by the need to concentrate on core business activities. However, there was a downward revision of market statistics influenced by the after-effects of the economic crisis in the Gulf. But some end-users were fully aware of the monetary benefits of involving a professional facilities management company. In fact, most end-users have begun involving them at the design phase of the building to improve the lifecycle of the asset and to efficiently manage operational costs in the long run.

Despite a growing demand for it and its increasing popularity, this industry was severely impacted by the economic recession, which spread across the region, starting in Dubai. However, some facilities management companies were well-insulated against this downturn, mainly due to the need for reducing costs; FM service providers help to reduce the overheads. Mostly, the providers who faced limited impact of the downturn were the ones who had a healthy order book and several long-term contracts in hand.

Though the number of contracts in 2008 was equal to that in 2007, the value was small. Moreover, many new buildings were almost 50% complete, and yet did not award a contract to any facilities management service provider, as developers in the region were sceptical about entering into long-term and high-value contracts. 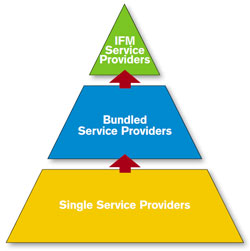 The total market for facilities management in the Middle East was around $3.5 billion in 2008. The market growth rate slowed due to the sub-prime mortgage crisis that affected the global business environment. Some new construction projects were put on hold, and hence, new contracts were few. However, the growth and scope for facilities management services in the Gulf States are still high.